Otto is a fight/bait dog survivor from Gary, Indiana. He was saved because his owner took a right turn on a red light and got pulled over.

Poor Otto was found in the back seat, starved and full of puncture wounds.

Sadly, though he was saved from the ring, he was put on death row where no one stepped up to save him.

We happened to be on line the day his time was up and sent him right to our vet. Otto was a emaciated and had 69 open bite wounds and was all bones.

He has recovered well after two surgeries, though he is not a fan of anyone near his mouth or tail.

After everything he’s been through, PCIR decided Otto should be a resident of the Crew.

*Update (July 2019): Otto’s health is quickly deteriorating and he has been put on a gruel-only diet (per our vet) 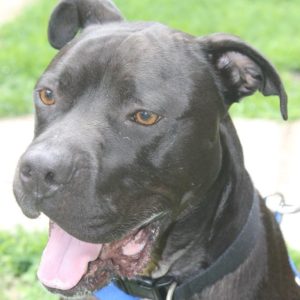