We would like to introduce this little nugget to everyone, his little human has named him Scout.

Scout was bought from a breeder a few weeks ago and shortly after was pretty sick. After several trips to the doctor and needing to be stabilized in the ER, Scout was diagnosed with megaesophagus with possible underlying issues that need more testing.Megaesophagus is a condition in which the esophagus loses the ability to contract and move food down into the stomach. Subsequently the esophagus becomes dilated and any food or water that is consumed will simply remain within the esophagus until it is passively regurgitated.

With this diagnosis and the possibility of other underlying issues associated with it, his family was devastated. After serious discussions and many tears it was decided that the care Scout needed was beyond what they could provide. Please, no judgements…this family is incredibly heartbroken for their boy and negativity will only add to their sadness (it will also be deleted).

Scout was discharged from the ER this morning and has joined the Pit Crew family. We will sponsor his care and further testing, get him a special chair to help him eat and work with our doctors to keep him stable.

We’ve got Scout started on a treatment and testing plan so we can get an idea of where we need to go from here. At only 10 weeks old, the sooner we can get him started, the better! 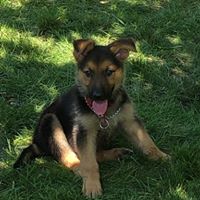